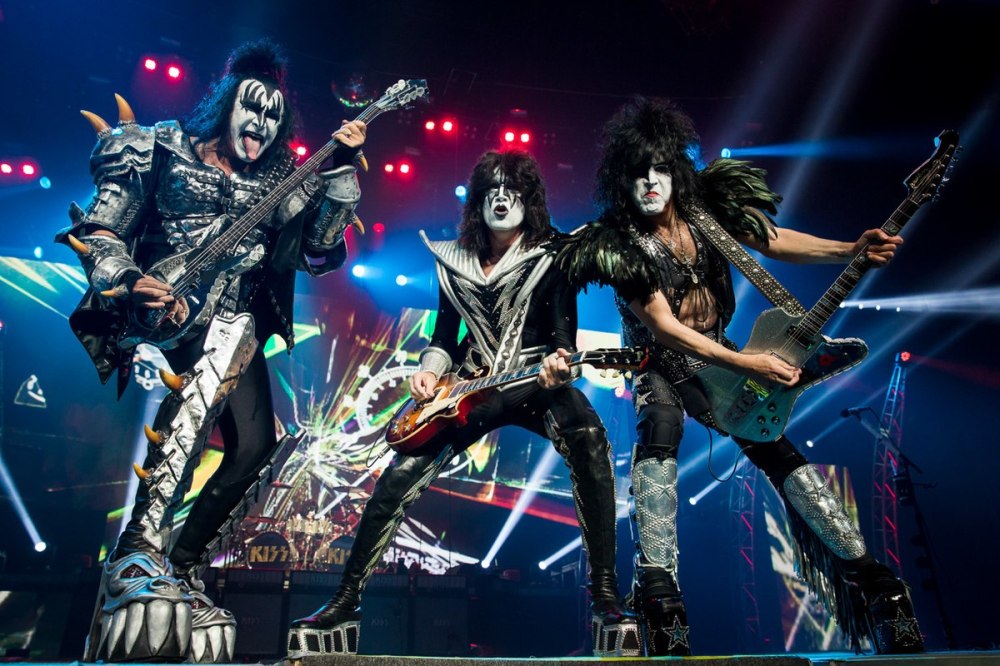 A few decades from now, nobody is going to speak of Kiss in reverential tones as a band of great musicians whose songs spoke to the anxieties, fears and dreams of a generation. The Beatles, they ain’t. Their oeuvre has always been simple rock songs about girls and sex and loving it loud and shouting it out loud and rocking and rolling all nite [sic]. Most, if not all, will be forgotten.

But they’ll be remembered – with, I submit, at least some reverence – as a band that took the concept of visual rock performance already laid down by The Who, Jimi Hendrix and Alice Cooper and shot it full of steroids. Kiss are first and foremost entertainers, not musicians. And on the first night of their supposed End Of The Road Tour last night in Vancouver, they doled out the entertainment they’ve been serving up for nigh on half a century, going back to their first gig on January 30, 1973 in a shitty club in New York with half-ass face makeup. No surprises, but no disappointments either. You know what you’ll be getting at a Kiss concert, and if you’re disappointed, well, that’s on you.

As a youngster of six in 1978-ish, one of my earliest memories of a pop culture touchstone (other than Star Wars, with which I was obsessed) was Kiss. A rather vivid memory sees me going with my dad to the house of a guy he knew for about twenty minutes. Sitting quietly on the couch as the grownups talked, I had a vantage point from which to peer into the man’s sons’ bedroom – such “big kids” they seemed to me, though probably no more than twelve – and its walls covered in images of Paul Stanley, Peter Criss, Ace Frehley and Gene Simmons. Or more accurately, “the scary guy with the tongue”. Kiss were at the peak of their popularity right at that point in time, and they were everywhere. When they later showed up on the kids’ show 3-2-1-Contact, that cemented it in my mind. I knew they were a cultural phenomenon, though I didn’t know that term and was too young to understand it if I did.

So intricately woven into their band identity was their iconic makeup that when, in 1983, Kiss jettisoned said makeup (and Frehley and Criss) and performed without it for the next thirteen years, they lost the one thing that made them distinctive and interesting. Gene Simmons has described himself as feeling personally lost for much of that period, with no identity as a rock star. And when Tupac Shakur offered them a mysterious intro at the 1996 Grammy Awards and the original four strutted onto the stage in full Love Gun-era makeup and costumes, they seized their chance to grab what most bands never get: a second act.

At least one other Farewell Tour later, this time they supposedly mean it. And Gene Simmons, ever the keen marketing mind for a band that, as writer Chuck Klosterman put it, has never had an agenda besides capitalism, is milking it for all he can while trudging about the stage with noticeably less energy than he used to. More than a dozen years ago Kiss again parted ways with Frehley and Criss, replacing them respectively with Tommy Thayer and Eric Singer and shoehorning those guys into the originals’ makeup and costumes. I’ve never been inspired to righteous indignation by bands hiring replacements for departed members; AC/DC rebounded from the loss of Bon Scott to record one of rock’s biggest albums, Journey made a success of it when they selected Arnel Pineda to fill Steve Perry’s shoes on lead vocals without makeup to hide behind, and with nary a peep from me. And there’s a perfectly valid argument that, by virtue of the get-ups and the larger-than-life characters that comprise Kiss, anybody who can play can hypothetically be part of the band (who knows, maybe Simmons’ plan is to re-launch them in a few years as a tribute band comprised of no original members while he continues to collect royalties). Kiss are certainly no more guilty of any sin in this department than the Eagles or AC/DC, at least for now.

The one point at which the current act does verge on shameless is the inclusion of the beloved ballad “Beth” — a bit tough for me to admit, since I like the song and it’s my daughter’s name — because that song was written and sung by drummer Peter Criss in what became his one unfailing opportunity to hold the limelight on his own at the band’s shows. Criss took a lot of personal joy from performing the song, especially when Kiss played Madison Square Garden in their hometown, so its inclusion and performance by Eric Singer in Criss’s Catman makeup seems like a slap in the face to Criss. Singer does a good job and performs it with as much passion and respect as he can, but still.

But there are far worse ways to spend an evening than watching an iconic band deliver their legendary stage show one more time, the makeup and costumes enabling one to forget that two of them are approaching seventy. It’s nostalgia for a simpler time, but it’s “living nostalgia” doled out in highly entertaining fashion. And in today’s cynical world, there’s nothing wrong with that.