Heavy metal has been the principal focus of my listening over the last few years. Naturally I was always aware of it, but it wasn’t until my late thirties that I actually started getting into it to any significant degree. Unusual, I know; it seems that almost everybody self-identifying as a metalhead has at least one story of youthful rebellion or defiance of parental authority connected in some respect to their musical tastes, usually something to do with volume and wardrobe choices. I don’t have any such stories; I was pretty much an obedient, non-rebellious kid more interested in going along to get along than in trying to plant a flag or defiantly declaring myself part of a particular subculture, musical or otherwise.  Heavy metal just didn’t really become part of my musical lexicon until much later, other than a flirtation with Metallica and pretty deep immersion into Guns N’ Roses, Rage Against The Machine and AC/DC.

The fact that I’ve just apparently stuck AC/DC (and Guns AND Rage) under the heading “heavy metal” would make a broad subset of heavy metal fans cringe, at the very least.  Obsessive categorization is probably metal fandom’s most tiresome trait; on the interwebs, one fan’s insistence on, say, Children Of Bodom’s status as an example of melodic death metal can easily lead to a frank assessment of the integrity of that fan’s mother’s reproductive system by another fan who sees them instead as representative of symphonic black metal. It’s thus hardly surprising that members of the subculture tend to voice strong views on the metal cred, or lack thereof, of bands like Rush, Kiss, Led Zeppelin, Guns, Rage, and AC/DC.  Having just seen them in concert last week, I figure I may as well add my own voice to the chorus on the subject of Angus and the lads.

I’m not going to try to advance the argument that AC/DC are currently a heavy metal band, basically because I don’t think they are.  Naturally a band can experiment and go through a stylistic evolution, without compromising its essence — although Metallica fans let out a collective howl in the mid-90s when the band (cut their hair and) released the Load and Reload albums with their exploration of sounds that didn’t resemble Master Of Puppets, even metalheads who dislike Metallica would be hard pressed to argue that they’re not still a metal band.

But that’s not what AC/DC did.  They made a point of not evolving, and it’s one of the features of their output that simultaneously makes them beloved and unleashes the inevitable complaints about how all their stuff sounds the same. Instead, heavy metal evolved around them, and eventually moved beyond them. But when?

Back when AC/DC released their international debut, High Voltage, in 1976, heavy metal was barely even recognized as a thing.  Led Zeppelin and Black Sabbath had laid the groundwork. Alice Cooper was chopping off his own head on stage every night.  Kiss were blowing stuff up real good.  Judas Priest were just barely two albums in and hadn’t given the genre its early dress code.  In that moment, in the early stages of a music genre still in its infancy, AC/DC fit in, through a combination of power chords, volume, stylings that would look metal in retrospect, and the fact that there weren’t any entry requirements yet.

Fast forward four years — virtually a heartbeat today, but an eternity back then in which the musical landscape could shift radically and often did.  By 1980, Ozzy had been fired from Sabbath to be replaced by Ronnie James Dio for two albums.  Judas Priest were officially hell bent for leather.  Iron Maiden had released their debut.  The New Wave of British Heavy Metal had been christened and acknowledged. Motörhead had released four albums and unintentionally created what would become thrash and speed metal within a few years.  A slew of classic metal albums were released that year.  And yet, only a year earlier, Creem Magazine had dug the genre’s grave with a cover whose featured eight bands included only two, or maybe three, that had anything remotely to do with the genre as it existed at that point. 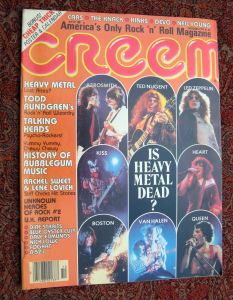 But in any event, AC/DC the previous year had released Highway To Hell, their last with the late lamented Bon Scott, and their penchant for Halloween-esque devil imagery was already well-established. (Not that such imagery could really be taken seriously in heavy metal until Venom’s first album in 1981.) Despite this, however, the band’s songs were still basic double entendre-laden 4/4 paeans to sex, girls and partying: in other words, nothing that other bands hadn’t already been churning out for years already. Highway To Hell was no exception. But for Scott’s passing, it’s possible that nothing much would have changed for AC/DC.

Back In Black, written and recorded with new vocalist Brian Johnson, marked a departure, even if only a temporary one. For the first time, the band’s songs displayed a distinct air of menace. “What Do You Do For Money Honey”, which on a previous album would probably have been another song about sex with whoever whenever, instead approached the topic with cynicism and a vicious edge. Similarly, “Hell’s Bells” eschewed “Highway To Hell”‘s we’re-going-to-Hell-and-it’s-a-party vibe for a much more ominous, in-your-face prediction: you’re only young, but you’re gonna die. No middle ground, nothing fun about it. The band were suddenly staring down the barrel of the mortality they’d never had to confront before, and confront it they did. And the title track is a pounding blast of defiance and fuck-you-ness unlike anything they’d recorded to that point.

So, what does all this mean? It’s trite to observe that heavy metal since its origins with Black Sabbath’s eponymous debut album and song (no coincidence, perhaps, that the opener from Back In Black also features an ominously tolling bell) has always reflected the dark aspects of human existence. And it wasn’t until Back In Black that AC/DC first did so as well.

In terms of musical style and feel, the only way to categorize a song or album as metal or not metal is to place it in the context of its time.  “Ace of Spades”, “Crazy Train”, “Number of the Beast”, “Living After Midnight”, and numerous other songs that are accepted unquestioningly as heavy metal from that era don’t really sound like they belong in the same genre as offerings by Mayhem, Deicide, Cannibal Corpse, etc. So the only fair comparison involving AC/DC is to stack them up against metal songs from the same time period. And in that respect, there is little doubt that Back In Black qualifies as a heavy metal album.  It fits perfectly in all respects — a listen reveals that quickly.

I said earlier that AC/DC’s shift was a temporary one, and the shift in question was their shift into heavy metal. The shift continued through their next album, 1981’s For Those About To Rock We Salute You, but after that they gradually reverted to their stock in trade – not that there was anything wrong with that.  But their brief foray into metaldom produced not only a metal classic, but also a rock classic, and the second biggest selling album in history.  No small feat, that.