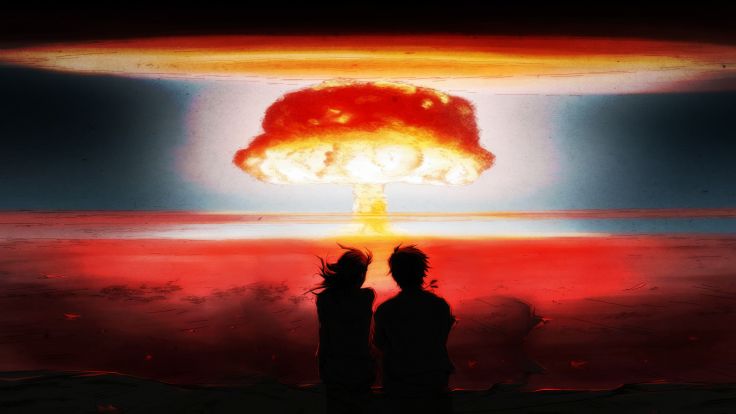 The topic of the Cold War as reflected in popular music has been in the back of my mind since starting this blog. With indications that the massive international dick-swinging contest may be lumbering into gear again, it seems timely to comment on it now.

For over thirty years, I’ve have a morbid fascination with nuclear war. Not being an otherwise gloomy person (I tend more towards mindless optimism, actually), it probably comes from going through the most impressionable formative years of life during 1979-1984, when east-west tensions were at their highest point in decades.

The size of both sides’ nuclear arsenals by that point pretty much eliminated the possibility of defense against them. There was no longer any talk of fallout shelters or classroom drills, since by that point there was no longer a realistic chance of meaningful societal survival after nuclear war. Few people took the idea of “limited nuclear war” seriously, either as a likely outcome or as some kind of livable option. The nuclear threat seemed to be on the cover of every news magazine and newspaper. Clinically realistic depictions of nuclear war entered the popular media, rendering the topic all but inescapable. More than that, the doomed outcome seemed inevitable – it was going to happen. It was only a matter of time.

It’s trite to observe that music reflects its times. Nuclear references in popular music in the late forties and fifties such as “This Cold War With You”, “Atom Bomb Baby”, and even rock pioneer Bill Haley’s “Thirteen Women” (about a male survivor of a nuclear attack suddenly having his pick of all the newly widowed women in town) sound bizarre and naive to contemporary ears, but they reflected both the lack of public knowledge at the time of the weapons’ long term effects and the relative security of America’s then-overwhelming nuclear superiority.

It’s no surprise that the shift of popular perception started in earnest with the Cuban Missile Crisis; it was the first time the world had actually stared down the barrel of imminent nuclear war. Bob Dylan has said of “A Hard Rain’s A-Gonna Fall”, released at the end of 1962, “every line in it is actually the start of a whole new song. But when I wrote it, I thought I wouldn’t have enough time alive to write all those songs so I put all I could into this one.”

Unfortunately it wouldn’t be the only time, so it was natural that the early Eighties proved fertile ground for music about the nuclear threat. Contemporary listeners often observe/complain that so much music from that era has a very distinctive sound and feel – electronic, processed and twangy (and almost totally lacking bass), but what’s perhaps surprising is that so many songs on such a doom-laden subject during its time of greatest risk would sound so… umm… pop-ish. Upbeat, even. German singer Nena’s “99 Luftballons”, which references an accidental nuclear launch due to detection of the titular balloons, and Frankie Goes To Hollywood’s “Two Tribes”, which opens with audio snippets from Britain’s now-infamous, well-intentioned but deeply ominous “Protect And Survive” series of civilian nuclear war instructional videos, are rhythmic and highly danceable. The subtext being, perhaps, that if you’re doomed anyway, you can rage and scream in terror, or you can somehow enjoy what little time you have left. And hey… if it was a reasonable musical response from Nena, living as she did right smack in the expected flashpoint of an east-west war, perhaps it was good enough for anybody.

Heavy metal, with its emphasis on the darker aspects of life, inevitably got into the act during this era, with one of the first examples being Ozzy Osbourne’s “Crazy Train” from his 1980 solo debut. Despite a lively upbeat riff, the lyrics speak of the seemingly inevitable insanity bound to afflict all of us “heirs of a Cold War” as a consequence of living in a world so constantly on edge. You either find a way to get through it and keep your head about you, or you look around at the demented slaughterhouse of a world and decide to check out.

Pink Floyd’s heavily Roger Waters-dominated album The Final Cut, released in 1983, loosely traced forty years of postwar British foreign policy. Its finale, the haunting and yet surprisingly beautiful “Two Suns In The Sunset”, gave a stream-of-consciousness account of an average Joe getting incinerated in his car by a nuclear flash, setting the stage for all of us to enjoy The Day After later that year and Threads the next.

As both a NATO ally and as the country lying on the most direct missile flightpath between the United States and the USSR, Canadian life was naturally heavily affected by the nuclear tension of the early 1980s. Rush chose to trace a bit of the history that had led us to that point in “The Manhattan Project”, inviting us to “imagine the place where it all began”, and recognizing implicitly that the architects of the bomb probably simply lacked the foresight, as anybody would have in the early 1940s with the war against Germany and Japan still raging, to see where their creation would lead us to forty years later (though Robert Oppenheimer realized it on viewing the first test).

In writing “Lovers In A Dangerous Time”, released in 1984, Bruce Cockburn sought to express his sentiments as a parent: “I was thinking of kids in a schoolyard. I was thinking of my daughter. Sitting there wanting to hold hands with some little boy and looking at a future, looking at the world around them. How different that was when I was a kid when, even though we had air-raid drills, nobody took that seriously that the world would end. You could have hope when I was a kid. And now I think that’s very difficult. I think a lot of that is evident from the actions and the ethos of a lot of kids. It was kind of an attempt to offer a hopeful message to them. You still have to live and you have to give it your best shot.”

As the decade wore on, and the tension grew prolonged and perhaps even morphed into some version of “normal”, and then led to the ascendancy of Mikhail Gorbachev and the first glimmers of hope, the morbidity and doom gave way, slowly at first, to appeals to our common humanity and pleas for understanding and empathy. Sting’s “Russians” and Billy Joel’s “Leningrad” sought to evoke those sentiments, expressing even as they did the sense of uncertainty in their own message. When you’ve been told for years that you’re facing an implacable foe bent on your destruction, even Sting couldn’t be sure whether or not “the Russians love their children too”.

It became clear by the end of the Eighties, however, that they did indeed. The easing of tensions led to an era of more frivolity and celebration; even heavy metal’s doom and death gradually gave way to poofed-up hair, colourful spandex and paeans to girls, cars and good times. But even that newfound optimism carried its own hidden menace in its message of celebration and the embrace of hedonism. It’s appropriate, perhaps, that by the time the Barenaked Ladies released their version of Cockburn’s “Lovers” in 1991, the song could quite readily support a shift in meaning from fears of annihilation to the dangers of physical love in the age of AIDS. The apocalypse had taken on a different form and music, once again, evolved with it. Nearly a quarter century later, it remains to be seen what popular music will make of the current round of the massive international game, at least once it becomes clear how far it’s going to go this time.